How's this for a scary picture? 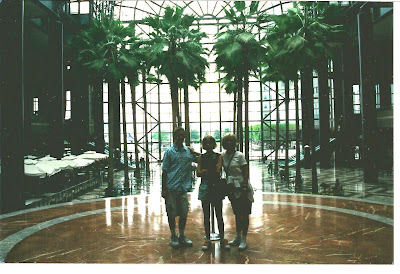 I bet a lot of you don't know where this is. It's the entrance we went through to get to the World Trade Center Mall. It's kind of a lousy picture and I even tried to lighten it but it just wouldn't work out. I think the picture wants to be eery looking. Anyway, we stayed there 3 weeks before 9/11 in the Embassy Suites Hotel across the street. It was a gorgeous contemporary style hotel. We loved it. For a week we were in and out of this area to go on the subway, up in the World Trade Center, eating, etc. I remember thinking how beautiful this area was and what a shame it would be if something happened to it (I understand that it's still there, thank goodness). How lucky we were to not be there on that fateful day. Even now I get the chills just thinking about it. When we went on top of the World Trade Center at night Gracie kept saying to me, "Mom, what if you had to jump off this building? What if you had to take a zip line from this building to the next?" I finally said, "If you don't stop saying that I will throw you off this building!" I had the creeps. The ironic twist to the whole thing is that when we got home and I went back to work I told people that I worked with, "If you want a really safe place to stay in NYC you should stay in the financial district!" Wow, so weird.

The funny thing about it is that a few days before 9/11 I was doing some free style paintings (very unusual for me) and I did one of strange looking people outside of some buildings and big birds flying around in the sky (I haven't looked at it for quite a while and should to get this straight). There was fire around everything and the figures had very tragic looks on their faces (some even had horse heads...a la Picasso). I was bothered by all the fighting in Ireland. It was at the time when the children were being harassed as they walked to school. I remember thinking how terrible it was. I was so upset over this and felt like the feelings in this painting really reflected that. So.....a few days after that...boom! It really appears that I had a premonition to what was going to happen.


I am a journal writer. I think journals serve so many purposes. One of these is that I think some day my grandchildren, etc. will find it interesting to see what my actual viewpoint is on the happenings in the world. So, of course, I wrote all about 9/11 and then continued to report regularly what was happening-things like, "It's now the 7th day and the fires are still burning. They haven't found anyone alive." That's just an example and probably not my exact words. One night I had a dream that I was standing on an island with a lot of people where the World Trade Center was situated. People were crying and hysterical. I looked out at the ocean and all of a sudden 1950 style Cadillacs in all different pastel colors started popping up in the water. The people that had died in the Trade Center were in them drinking lemon aides with smiles on their faces-as if to say that everything was all right after all and they weren't suffering any more. I think it was a spiritual way of setting my mind at peace.

Okay, well, I've avoided doing my homework for as long as possible. I really have to get back in there and start reading about arrowheads and such.