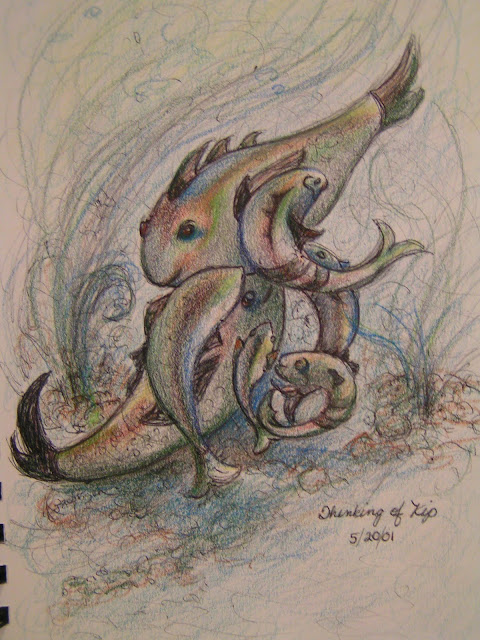 Can you tell it's from my sketch book?  Ha ha.
9 years ago I was sitting in church and thinking about my son, Kip.  He was in the Navy and out to sea a lot of the time.  Part of that time was spent south of India during the 9/11 aftermath.  I'll back up. Kip joined the Navy just before he turned 21.  Nothing was going on much militarily for the U. S. in the world.  It was a safe choice and one way to get himself going in life.  We were very proud of him for making that decision-although none of us were big on the idea of enlisting in the military (I was very against it in the 70's because of Vietnam).  But this was a brave venture for him.  I'll never forget seeing him board the plane, walking through the gate, with his baseball cap on backwards.  You know-la de da-no care in the world.  What an awakening he got!  Boot camp was unreal but he made it through.  When we went to his graduation from it we were amazed what a different person he had become in a few short months.  Just amazed.  Although it was miserable a lot of the time (got sent to a room where they cranked up the heat and made him, and others, do exercises for hours-for him, just because he asked someone to pass him some food while in the galley)-he told us and we could see the accomplishments he had achieved.

So, he chose to go to school in Virginia Beach to learn how to be a radar tracker.  No big deal, right?  He chose Japan as the place he wanted to be stationed and his first ship was called the Vincennes (do you remember when one of our ships accidentally shot down an Iranian plane-I think it was-in the gulf?).  He said, "Don't worry, Mom.  We'll be the last ship to be sent into the gulf."  In August of 2001 there was a big emergency out to sea, just east of China.  All of a sudden things starting happening with the military.  It was active, big time.  Kip's ship was sent to this area and he said he now had to track hundreds of fishing boats.  It was incredible.

One can see why I was thinking of Kip in church-praying a lot.  I call this drawing above "Thinking of Kip" because he LOVES to fish.  He could sit out by the lake by our cabin for the whole day by himself just trying to catch 1 fish.  We all went fishing at a "guaranteed to catch a fish" fishing hole where we caught a lot.  Kip cleaned all our fish.  Cliff and I tried to help but we spent more time over at the hose washing our hands.  Kip would eat all the fish that no one wanted while in scouts.  I have a picture of him when he was about 7 kissing a fish he caught at the cabin.

Now he's out of the Navy after 9 years, raising his son, going to school, and working part time as a mailman in California.  He's a terrific father and wonderful man that we are very proud of .
Posted by Julie at 8:59 AM