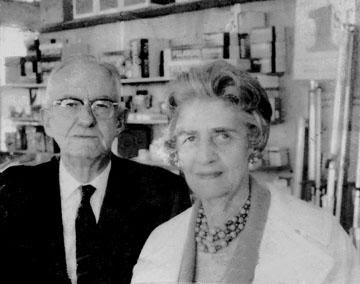 As I was searching through my pictures I came across this great old photo from the 1960's of my grandparents.  Actually Anne was my step grandmother but since I never knew my biological grandma, Clara, Anne was just the same.  Anne and Forrest were married in their later years after Clara died of breast cancer when she was 62 (and I've been told she was an incredible person also).  Anne Critchelow had never been married before.  They were married, I believe when she was in her 60's.  But they grew up just down the street from each other.

If you think that some women are brave and tough then you never have seen the queen of them.  When Anne was a young woman she went to Johannesburg, Africa, in the early 1900's to work as a secretary, all by herself.  We loved to sit on her stool that she had gotten from an African tribal leader.  I wish I knew what happened to it.  Anyway, this lady was like an Auntie Mame.  She always drove a Chrysler Imperial, had big floppy hats, a cigarette in one hand, dachshunds at her feet and a "dearie" out of her mouth.  What an influence she was on me.  I remember one time reading a book to her and I said I couldn't read the word.  She told me that I should never say that-that I could do anything I wanted to.  Anne would quit smoking only to start up again because she had gained too much weight.  What a character she was.  I just loved her.

Forrest was a self made man that lost his father when he was very young.  He used to deliver his mother's baked goods in his little wagon.  He started out as office boy at Strevell Patterson Hardware in Salt Lake City, Utah and worked his way up to president.  I remember sitting at my grandparent's home and strange men would come to the door.  My grandpa was always giving them money.  He helped everyone.  Nobody loved his dogs like grandpa or played the piano more beautifully, by ear, than he did.  He never had had a lesson.  I loved their house.  It always smelled wonderfully of pipe tobacco.

Such memories.  But  I think that my siblings and I turned out the way we are in many ways because of Anne and Grandpa.  Or as we called her "Annie Wannie".  Wow.  I can't wait to see them again some day.
Posted by Julie at 10:22 PM