Okay. I think it's fix it time! 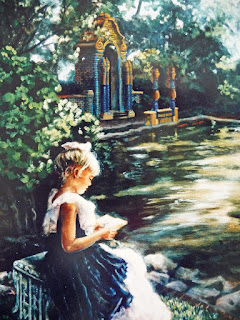 "The Beauty of Literacy" - Julie Jacobsen

This painting has nothing to do with my post.  I just thought I'd add a picture.  It makes it more fun to read.  Right?  Right.

Well, I have a few paintings on the wall that I've been struggling over what to do.  They just aren't exactly the way I want them to be.  So I'm going to do some fixing.  You do have to be very careful about going back and working on a painting after it's been a long time.  Your style can change and you'll ruin it.  I have, personally, done that.  I did a wonderful painting of Chris, my husband, when we were dating, of him at his favorite cabin.  It really was great, except he didn't like it.  That's because the landscape didn't match the area where the cabin was.  I had no idea what it looked like.  So I made it up!  Not a good idea with something so specific.

So we got married and the painting was hung over the mantle for quite a while and I decided to fix it.  Very bad idea.  I had no idea what I was doing and ruined it!  I was so disgusted I threw it out on the trash can.  Another big big mistake (dummy dummy me!).  I should have just cut the portrait part out-along with the cool old Rocket car (they really were great, I have to say) and put it aside.  Now a garbage man has a semi nice painting of someone that doesn't even mean anything to them.  Dang.

Sooooo.  There's a few lessons to be learned here:

1.  Don't go back on a painting to fix it after it's been too long
2.  Don't give the garbage man the whole painting
3.  Don't paint a made up landscape, etc.-trying to make do.  It never ever works

That being said-I still want to fix a little bit on these and I'm going to be careful.

Also, remember, in a much earlier post I told you all it's OKAY to throw a painting away if it's absolutely a dud.  You don't have to keep it and mope over how unsuccessful you are about problem solving.

And, no, I don't have a picture of these fixer uppers yet.  I'll post when I get them done.  I have a photo of the "Chris and car" painting some place.  When I find it-I'll post.
Posted by Julie at 6:43 PM