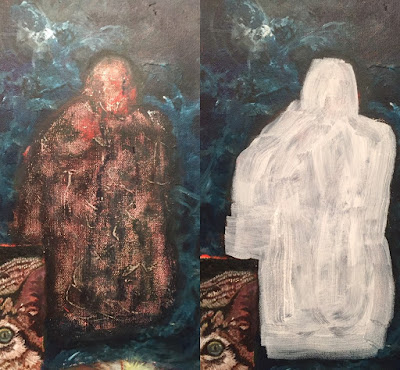 Welllllllllll.  I am going to finish this Christmas painting even if it kills me!  Or so I have thought but I don't really want to die over this.  Anyway.  I like so much about this painting but the starring vignette of the whole thing is the one with Joseph, Mary, and Jesus.  It really has been a struggle but I think that's because I've avoided the real work on it.  So, today I admitted defeat and pulled out the rubbing alcohol.  It takes acrylic paint off quite well.  I removed as much as I could being careful not to press too hard and ruin the tautness of the canvas.  At this point I don't care about the under painting at all.  I just want to move this forward.  So, that means a good coating of white paint.

I also sat down and did a meaningful sketch of the 3 of them.  I need a plan and I was trying to wing it just like with my sketches.  Loose and free.  But I had to get tight and spend time on how I want it to basically look.

I'm an artist that's willing to show my mistakes and that gives everyone some hope, doesn't it.  It makes artists that are so much better pat themselves on the back and say to themselves, "See.  I knew I was better than her and this proves it!"  Or other artists that don't feel as accomplished can say, "Wow.  If she really can do lousy work then there's hope for me too!"  I can assure you that there's plenty of lousy work that I've done in the past but as I wrote about a while back it's okay to throw things away!  Yes, you can!  But make sure you really want to because you can't ever get them back.  There are some garbage men that are probably thoroughly enjoying some of my paintings that I felt were duds (why, oh, why didn't I think to cut out the parts that I liked and keep them!?!).  Well, you do live and learn.

This was my main project today and I'm going to make more progress even though I really want to be a slouch and work on something much more enjoyable.

I should, also, say that if you aren't getting the results you want it's a good idea to just turn it to the wall and then look at it at a later date.  You might find that now you know what to do with it.  Just don't throw it away until you've made sure.