Well, I had more stuff to put on here today but for some reason my camera won't load onto the computer and Charlie, my son, isn't here to figure it out for me.  Drat.  Must wait until tomorrow but this is the main thing I wanted to post.  Grant Clawson is my neighbor and we are so fortunate to be able to see his work all the time.  Whenever he finishes a major work he invites our neighborhood to come to his studio and enjoy it.  He sets up chairs in front of the painting and answers everyone's questions.  We also get to see all his other great work.  He and his wife, Irma, are very hospitable.  They make everyone feel at home.  Some of the paintings are so large that he has to have a 2 story high ceiling to accommodate them.

I wanted to put a link on here but realized that because this is for a periodical it will change.  So here is the article in it's entirety.  I know it's long but I couldn't cut out any of it.  It's worth a read.  Grant has had some very bad health and Irma was hit by a car.  They are an amazing couple.  Just love them! 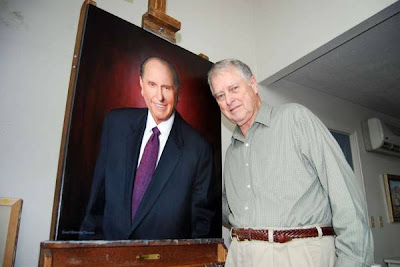