FINALLY! PROGRESS ON MY CHRISTMAS PAINTING! 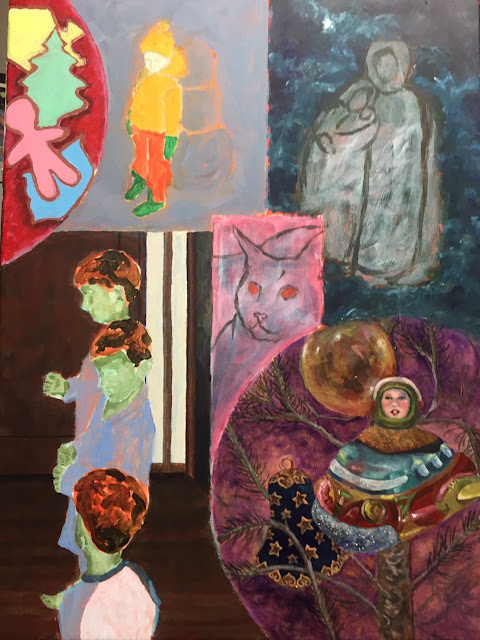 Okay, so I know it's been way too long since my last entry but we've had so many major problems since then in our family. I don't know if I mentioned it before but our daughter was diagnosed with breast cancer in October of 2015 and had a double mastectomy.  She carries the BRCA2 gene mutation like Angelina Jolie.  Then I was diagnosed with the same thing.  It means chances of having breast cancer, ovarian cancer, prostrate cancer, and pancreatic cancer are greater than in a normal  population.  Note that I didn't just say female because men can get breast cancer also and there's the prostrate element in it also.   I listed chances in that order.  Gracie lives in NYC with 2 very small children and a husband that is a resident doctor at a NYC hospital.  Of course we were back there constantly to help and it was a good thing I had my job with jetBlue.  The company was wonderful about helping us and others to get on flights.

In April I had genetic counseling and they advised me that because I was older I didn't need to have a mastectomy but further screening as a precaution.  Also they advised me to get my ovaries out.  We decided that 2017 would be the year for that as we already had enough to deal with with upcoming help for Gracie.  Would you believe I started to fill bloated and when I ate I filled up too fast.  This was in September and I started to think this reminded me of my sister's ovarian cancer 17 years ago (she's still alive!).  The symptoms continued and I called my doctor to ask about it.  We were slated to go back to NYC as Gracie was having breast reconstruction.  The nurse asked if I was bleeding and I said no.  So she said I could wait until I got back to come in.  That's what I did.  In the meantime when I was in NYC I kept thinking what is the deal?!?  Why is my stomach feeling so fat?!?  I must need exercise.  So I was running up and down her apartment building stairs constantly the whole time I was there.

I came back and still had symptoms but I had an appointment for the doctor towards the end of November.  When I went in she ordered tests but the next day, as I was working, after 4 hours I thought this is ridiculous!  It will take days before the insurance is approved for the tests.  I told my husband we have to go to the ER.  So of course they discovered malignant cells in all the liquid that the cancer had produced in my abdomen.  Long story made short:  I had surgery for ovarian cancer 11/29/16.  Actually it's really Fallopian tube cancer.  They're sure it started there and usually does with BRCA2  patients.  Now I'm undergoing chemotherapy at a  great place in Salt Lake City:  the Huntsman Cancer Center.  I feel confident that, even though it's 3rd stage, I'm going to beat it just like my sister.

So, any women out there, please take note of my symptoms and don't ignore them. If I had I probably wouldn't be here.  A doctor told us that they hardly ever diagnose this type of cancer early unless the woman is in some kind of accident and they discover inadvertently that something is wrong with her ovaries.

Here it's the end of January and yesterday I felt well enough to paint, finally.  Chemo really takes it out of you.  I'll post later more about it but for now I just want to say that I'm going to try and keep up with my art.  It's hard as my hands are very shaky sometimes but I think it's very very important to have something about me besides my cancer diagnosis.

P. S. Gracie is doing so well!  So far so good!  Can you believe that this happened to a mother and daughter all within the space of a year.  Too strange for words!