This is how I did my entry for "Monday Art Day" 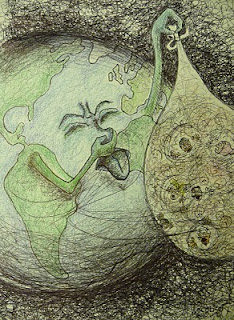 The theme this week is "castaway" and, I don't know why, had this thought flash into my mind.  What if planet Earth got so sick of all our squabbling, environmental abuses and other general bossy/know it all things we do?  I just saw us all tossed into a bag and thrown into outer space.  I know I'm taking liberties with the word castaway and stretching it a little to think it means really cast away.  But, when you think about it, we ALL would be castaways into the void until our mortal lives ended-which would be pretty dang quick!  Just another way of teaching us a lesson besides flooding the surface. 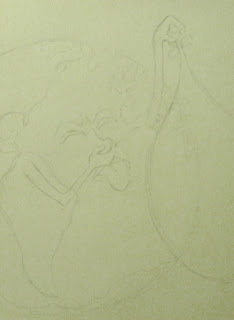 1)  I began by thinking, of course, and realizing that I don't really know what the continents look like.  So, I went down in the basement and dusted off the Atlas.  Then I looked at my previous unsuccessful attempt (from yesterday in one of my sketch/workbooks) and drew a rough sketch. 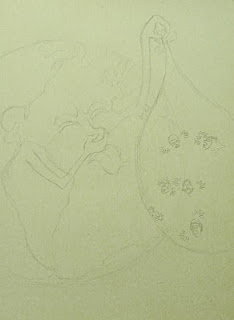 2)  I added more details-such as the hint of the struggling people in the bag. 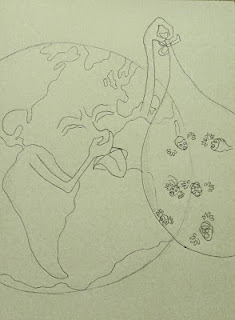 3)  I liked what I did.  So, I outlined it with a pen that I like to use because it will sketch without blobbing.  I think it's a Pentel. 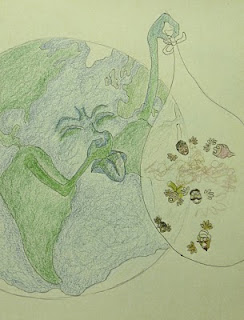 4)  I decided that, unlike yesterday, I would add some color.  Out came the trusty bag of old colored pencils. I began that. 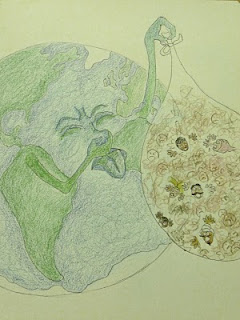 5)  In order to give more of a hint of lots of people in the bag I added some quick little hints of faces in color.  I didn't outline them in black because I want them to recede in the background and be behind the main unhappy "character" scrambling to get out.  Life in the bag at this point would be chaotic and mad, to say the least. 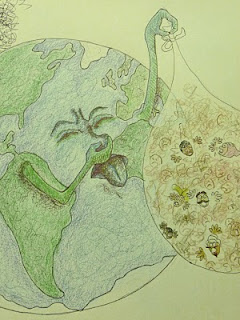 6)  At this point I decided whether I wanted to add any color to the sky.  I thought, no, as I wanted only the white to show through my pen strokes.  I wanted the main focus on the earth and the bag.  I thought I would accomplish this by not putting any color in the sky.  Darkening the colored pencils to a high saturation wasn't a route I wanted to take either as keeping it pastel would also stick the focus on the main event. 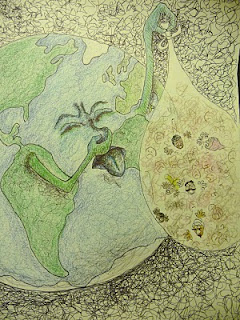 7)  The color was at the right point.  So, I began to use my pen to create shading and distinction-also to form the body of the sky. 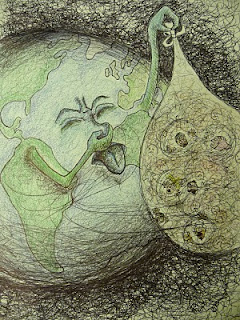 8)  I thought to myself that I was tooooo tight.  So, I forced myself to loosen up and let the strokes fall where they may.  I didn't want to keep this a static and tight composition.  Whimsical was more of what I was thinking.  So, I really went into the zone of letting things happen (scary).  I added some movement strokes to allude to Earth's arm swooshing up to it's nose to pinch it shut and say, "Pee-uuuuu".   Because that's what I pictured would happen.  There are also movement strokes to show the bag swooshing outwards.

9)  (See image at top of post for final stage) All I need to do now is to darken and make sure that things stand out.  I want things like the Earth's arm to stand out and not blend too much but be noticeable.  I scrutinized it and decided that, even thought it's not a masterpiece by a long shot, it says what I want it to say and I HAD FUN DOING IT.  The fun part was important to me because I'm not looking for high stress this week.


Art History Moment:  Some artists like to put themselves in their paintings-however small they might be.  In "The Arnolfini Marriage" by the 17th century Dutch painter, Jan van Eyck, if you look very closely in the mirror on the wall you can see a teeny tiny portrait of him.  Other painters, such as Norman Rockwell, liked to do that as well.
Posted by Julie at 3:36 PM