A few more Capitol Building pictures plus my painting 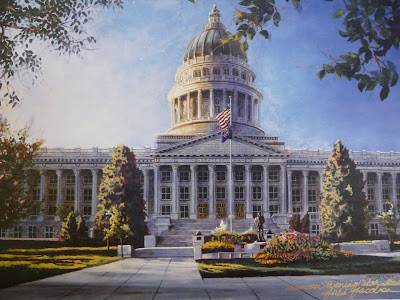 Well, I don't have a lot of time this morning but thought I would post a few pics of what I've been doing. First of all my sisters, great niece and I had a very fun lunch at a great new (to us) Mexican restaurant. I don't remember the exact name but it's on 13th South and about 3rd West in Salt Lake City. It was like being in Mexico. Very yummy food and fun old time Mex atmosphere.

We had a fun Father's Day dinner with our fam. This could be the last time that we do that with Tom, my father-in-law but you never know. These old people have a way of bouncing back. He hasn't been doing too well lately. Poor guy.

Last Friday I went to the Utah State Capitol as part of a church activity with our 10 and 11 year old girls. If you haven't been there for a while I suggest you need to do it. It is so gorgeous. They restored a glass floor in the center of the main area and a mural that once had sea gulls flying in it is once again showing the originals. We took a tour and that was very fun.
Posted by Julie at 9:45 AM 1 comment: 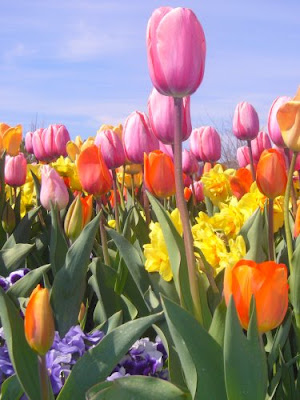 Way back in 1974 I quit going to school and had less than a year to finish! I can't believe how many of us are out there (woman gives up schooling so husband can further career). I could just kick myself! So now I don't have anything preventing me from finishing it. I checked into what I needed and it turns out that it won't be that bad. If I take 2 classes a semester and skip summers I will finish in 2 years. I'm going to get my Art History degree...FINALLY. The only thing that has me very anxious is that the degree requires math now. Of course it's algebra and I was always horrible at that. I'm going to have to take a prerequisite class so I can grasp the other concepts. Sounds awful, doesn't it? I don't care. I'm GOING to do it and starting this fall. Actually classes start in August...gulp. I'm starting with math and something else. I haven't decided what that will be. So get ready for new adventure stories. This is going to be good.

P. S. I had to add a picture to make it more interesting and I just love this one that Gracie took several years ago. I hope you like it.
Posted by Julie at 10:06 PM No comments:

Okay, so this is stupid

Well, someone said that they couldn't post a comment on my blog. So I thought I would just see if it's impossible to be a follower. Well, I actually made MYSELF a follower-which looks quite strange-like I love myself. It really isn't that, really! I just was experimenting again and did something I didn't intend to do. Oh well. Another thing to laugh about and that's quite precious!
Posted by Julie at 5:05 PM 2 comments: 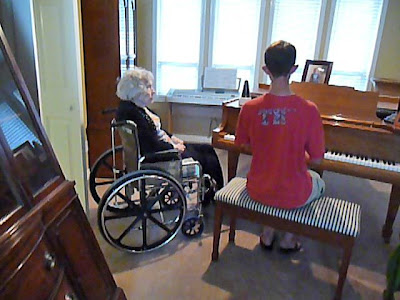 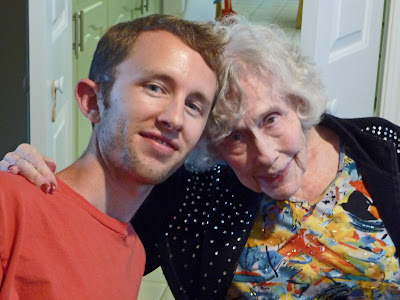 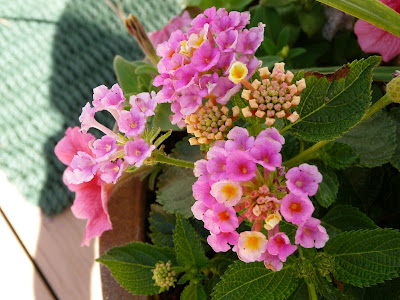 Hi everyone! This morning I found an interesting sight that talks about the difference between organic eggs and the supermarket kind. If you go to that sight you can read all about it and see my comments about the organic ones that we have tried. http://cleanerplateclub.wordpress.com/2007/06/19/the-great-scrambled-egg-taste-test-aka-the-taste-of-gold/#comment-7873. Believe me it's worth a look as it opened my eyes. I always thought the way they keep the chickens in those little tiny cages is so cruel and hurts me to think about it. That's also the way they keep them for the packaged boneless skinless chickens, I believe. I don't even want to read about the handling of cattle or I won't be able to eat beef anymore.

So why do I have a picture of flowers in this post? It's because it's gardening season again and I'm loving it! Our roses are so gorgeous due to the tons of rain but some are really getting mildew on the leaves. I always battle that due to the sprinklers that have to water the lawn also. Some day we'll solve that problem when we can redo the sprinkler system.

We had a great time with my mom and father-in-law, Tom, last Sunday. Unfortunately Tom really started a downward spiral after that. Charlie said maybe it was the meat that we served-it was so tough. Or it could have been the gravy that Chris put steak sauce in. Oh well. At least we tried. But we got some great photos of Mom with Charlie at the piano. It was the first time she had been to our house since last November. I was very excited-even though it was so hard to get her into the house. Chris and Charlie had to carry her up the stairs in the wheel chair. So, it's not something we can do very often and I have to have them help me. I wish it wasn't like that but that's life, you know.
Posted by Julie at 10:33 AM No comments: