When you don't like the calendars-I say, "Make your own" with Sharpies! 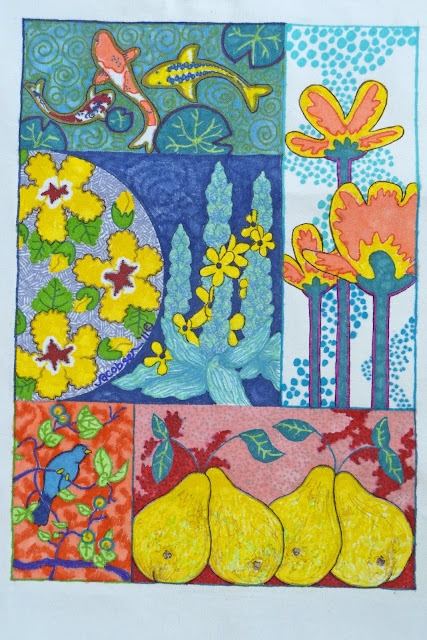 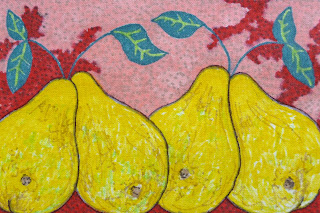 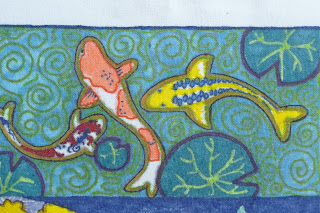 So, the title tells it all in a nutshell.  I just couldn't find what I wanted at the stores and nothing on line that I wanted to pay any money for.  The more I looked the pickier I became.  Nothing held a candle to my "The Art of Ornament" from the Museum of Fine Arts, Boston calendar that I have been able to buy for 2 years straight.  None to be had at the stores this year.  So I decided I was going to let the artist, Eugene Grasset- that did the art work in them -be my inspiration.  As you can see I flourished.  It just sprouted out of me and in such a lovely way.  Some of you might remember my sandals that I used Sharpies on a while back.  I decided to do the same, in a sense.  I bought untreated canvas material and bought a big set of Sharpies.  Then went to town. 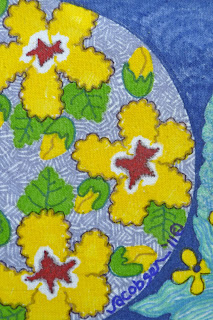 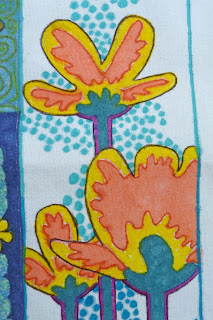 I want to tell you that pencil eraser doesn't erase well at all on canvas.  So I learned from that and did some sketches in my trusty work book-I mean sketch book (remember remember?).  I also figured out my color scheme.  Being a big believer in using your own photos when necessary I went through a bunch of my flower pics that I had taken.  Then used some unusual flowers that had meaning to me.  So, folks, these are all my own original designs (please keep that in mind, right?).  After I made my plan I carefully drew it out.  Then the fun part began.  Because of the nature of the untreated canvas lovely textures developed that I wouldn't have even known.  I had no idea how much you could use these markers like regular paints.  The bleeding characteristic of these pens lent itself to a more watercolor type look.  I loved it!  Plus you can blend the colors (you're welcome, Sharpie company).

As I was working on the color I was careful to keep continuity in my colors.  Notice how I tried to use the same colors more than once (almost all) throughout my composition.  This gives movement to the design and keeps the eyes wondering around to discover, hopefully, new delights constantly.

At the end I scrutinized it and realized that part of the success in the sandals was the thin ballpoint outline I used that make things stand out.  I hope you'll notice that I only used it sparingly as I wanted some edges to be soft and recede more.  This made some of the designs, the stars of each picture, pop out.

You know, I feel quite happy about this.  Oh, the calendar part.  Well, I left some extra white material that I didn't draw on that I'm going to just put a new month on when they change.  I just can't keep up with this every month.  That seemed a little obsessive to me.

Art History Moment:  Yes, finally here's one.   Eugene Grasset, it turns out, is one of my favorite decorative artists that was reintroduced in the 1960's.  He was part of the Art Nouveau (spelling please?) in France during the late 1800's and early 1900's.  I forgot that I love this style!

Actually Grasset was born in Switzerland and moved to Paris.  He was heavily influenced by Japanese prints, Near Eastern art and medieval stained glass.  At first he worked in textile designs and graphic ornament.  Then branched out to bigger projects.  He taught at the Ecole Normale d'Enseignement du Design school.  A big believer in using forms from the natural world-he wrote and illustrated the book "Plants and their Application to Ornament".

Poster artists during the 1960's reinterpreted his style to modernize it.  I can remember many a rock concert poster that had the same feel to them.  They were just what a fairy tale lover (me) from that era would love to own.  And I did.  I wish I had them now.  Drat.
Posted by Julie at 3:56 PM No comments: 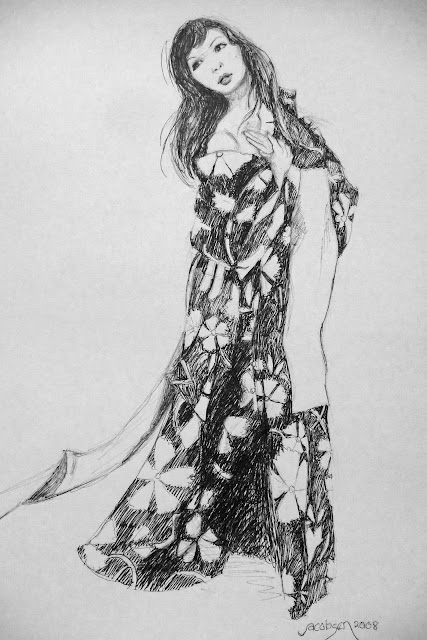 
Once again I had fun drawing from a newspaper photo.  This one struck me as so beautiful.  Do you remember a while back reading about how if you make a mistake make it look like you meant it?  Well, I didn't make a mistake on this but I just didn't like the way her leg was posed.  So I blended it into the fabric.  I'm sure you can see that now.  The composition looks more pleasing to me.  Before it just looked awkward.  What do you think?
Posted by Julie at 3:04 PM 2 comments:

Another one of Chris' hilarious but useful projects!

When I saw this today on Gracie's blog I just HAD to post it on mine.  It is so hilarious!  First off-let's just answer your question:  no, Gracie and Dave don't sleep in a bunk bed (how unromantic).  When we went back to see them in NYC in December she showed us her favorite spot in the apartment-the heater.  She said she spends hours on it waiting for Dave to finish studying.  So, a light bulb went off in Chris' brain.  He decided it would be fun to build some kind of platform over it where she could perch comfortably.  Luckily for her she came to SLC at the beginning of this month and Chris set to work making it with his usual junk in the garage.  You know it had to be under 50 lbs for Jet Blue.  It was a real challenge.  Plus he wanted to send some of his tools for Dave also.  They packed some of them in her checked bag (this is fine with Jet Blue if not motorized).  Anyway, you can well imagine her in the airport lugging that big thing along with her checked bag and carry on as Dave was waiting outside.  I don't know how she did it but my kids are always hauling heavy stuff in the airport and suffering (Cliff at Christmas time-that was awful one year).  Anyway, they took it home and you can see that the queen gets the best part (as usual-ask her brothers).  Dave is squished on the bottom.

Gracie has started a new blog thecostumeproject.com.  At the top of her blog are some drawings that are by me.  It's so fun that my sketches have come to something.  Who would have known that my little doodles would ever have a life outside of my sketch book.  But here they are on the top of a very original and interesting blog.  Gracie is so good at this now since she has several other personal blogs and is the blogmaster for shoplet.com.  I call her the blogmaster because I feel like she can do just about anything she wants.  It's amazing to me.

Anyway, you'll find some creative ideas.  So check it out. 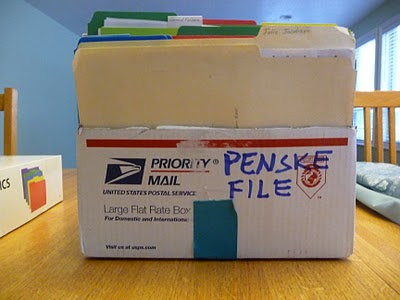 Do you ever feel scattered all over the place?  Well, I do right now.  I have so many projects and I need to focus.  My new one is genealogy and it is daunting.  Our church is constantly telling us that we need to do this and I have been trying but it's like this big stumbling block.  I have a slew of information that needs to be organized but I just look at it and want to run away.  Some really nice people in our church have been trying to help me get going.  They came over yesterday with an organized file of some of my ancestors.  Today's project, for me, was to put them into a filing system that I could feel good about.  Well, it took me all day, off and on, to buy the files and just put this stuff in them.  My husband, Chris, came home and just laughed.  He pulled out a marker and wrote "Penske file" on the front.  Any of you Seinfeld fans will recognize what episode that is about.  George goes to work for a company and spends about a week with an accordion file on his desk.  He does nothing else but play drums with his pencils and other stupid things.  When the boss comes back to the office after a trip he is furious that this is all George has done.  Do you get the correlation to my files?  I threw it all together and that was good enough for me.  Blaaaaaa.  I'll get going but I'm having a hard time.  Fortunately, Gracie is helping me now. 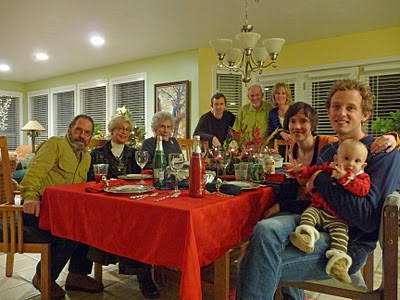 So, the annual Christmas dinner was a huge success.  I wish my whole family could be there but it was great having all that we did have.  Cliff, Lorien and Kyra came all the way from Baltimore.  Let me just tell you that it's so great to see Cliff so happy.  Anyway, Suzanne, my sister, and her husband Michael came even though they're Jewish-such good sports.  Gami, my mom, came-even though my husband, Chris has to literally carry her in the house like a baby.  Then there were Chris, Char and I.  That sums it up.  It was a delightful dinner and we frosted gingerbread cookies afterward.

Okay.  I've been just a little behind but tomorrow I go part time with my job-YAY!  I'm soooo happy.  Incidentally-can you believe that all these years I've been reading, writing, you know, a normal literate person, I thought when you are happy about something the correct spelling of yay is yea.  Duh and double duh.  It's not yea it's yay.  So I hereby change my spelling of one of my favorite words. YAY!
Posted by Julie at 10:29 PM 4 comments: