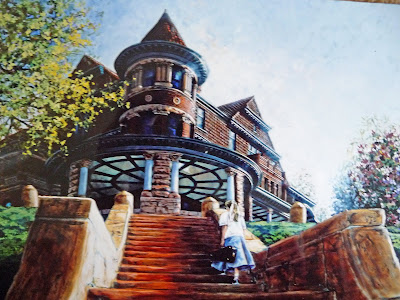 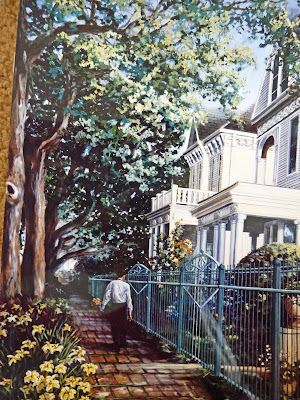 I thought those of you that got a kick out of seeing my painting steps for the Egyptian Theater painting would like to see one that is even more shocking. So, here is the McCune Mansion in Salt Lake City. It's a gorgeous old mansion built around 1900 by the McCunes. It's up on a hill very close to the State Capitol building. What I could gather from my in depth researching (as I told you already that I love to do) the McCune's Mansion is sort of a "nanny nanny na na" to the Mormons. As if to say, "Look at us. We have a prettier building and it's high enough to look down on you guys". After it went out of their family's hands it became the McCune Music Academy and many of the older generation took music lessons there. As you will see in the final painting I put a little girl climbing the stairs with her violin. Aparently Mrs. McCune sent her builder all over the world to get the finest materials. There is a whole second set of roof tiles to replace any broken ones. I believe that the roof tiles are from Holland. She incorporated many styles also from all over the world in her plans. Now it is a reception center and I heard that Debbie Reynolds filmed a made for t. v. movie in there. It's only the inside. As for ghosts there have been reports of children giggling in the ballroom upstairs. After a lot of hard work in trying to find a buyer I sold it to Philip McCarthy and owns the mansion now (that buy enabled us to go to the closing ceremonies of the Olympics and then some). He was one of the owners of the Salt Lake Tribune (not any more). A few years ago I went to a wedding reception and there by the front door is my painting.

Oh, the painting in the back ground is "Hot Date" and I'll post the final painting of that one also. Cliff, my son, is in that. It's the garden district of New Orleans.

Jeez, I uploaded the under painting example. Now I've got to search. Not doing homework....I'm really a bad girl but I'm kind of doing it while I'm uploading things (I know...I'm a dumb bell).
Posted by Julie at 3:44 PM