Guernica - What has always stuck in my mind about Picasso 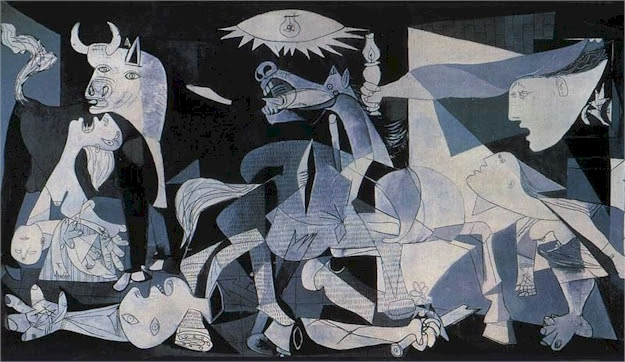 Okay.  There is a work of art by Picasso that I just always think about.  It's called "Guernica". It's a painting about the bombing of the city of that name in Spanish Basque country in 1937 by the German and Italian forces.   It was ordered by the Spanish Nationalist forces during the Spanish civil war and led by General Francisco Franco.  The little village was kind of like a "testing site" for German bombs.  A precursor to the Blitzkrieg of Germany.   In other words-it was bombed to smithereens.  Picasso was commissioned for a large mural in the Spanish exhibit of the 1937 World Fair in Paris.  It struck a cord in the world of the horrors of what a human can do to another human being.  It's such a graphic representation.  While it's not what I'd like on my wall-it really does fulfill an artistic mission to try to better this world.  I have never been able to get it out of my consciousness.  Now it can be stuck in yours. 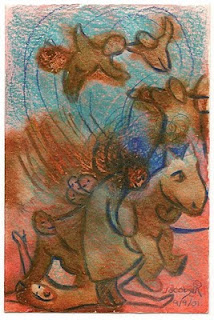 It must have inspired me in some way when I did this small drawing a few days before 9/11. You can read about it in my post earlier on (I think I mentioned it twice before this).  You all might think that I copied Picasso but I really wasn't even thinking of him when I did this.  It was truly an inspiration from my feelings over the horrors in Ireland-the little children that had to be guarded on their way to school.  Then, like I said, 9/11 happened I think 3 days after I did this.
Posted by Julie at 4:26 PM