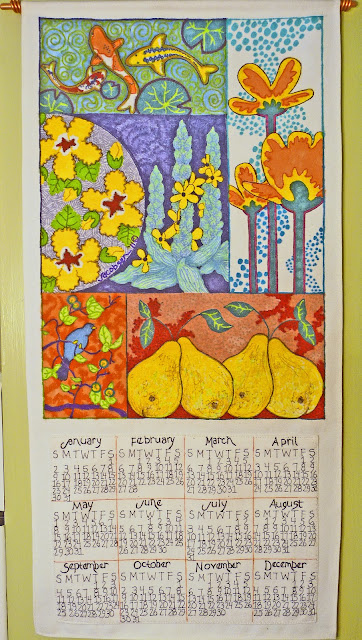 Well, you guys-I did the actual calendar part 3 times!  First I thought it would be cute to have each month individually pinned with a colored pin (boooo, such a dud, dumb).  Then I thought I'd make it one piece and I just couldn't bare to not do pretty colors and designs in each square that I thought the numbers and letters could be written on top of.  Chris said, "How can we ever read them?"  I told him that he never looks at the calendar anyway.  So, never mind (in MY mind I was thinking, "Yuck.  This looks awful but, oh well, I want to be done with this!).

When I put the black letters on top you could hardly read them.  I held it up under the pictures and it looked so bad.  It competed with my design (this after instructing my friend how you need to have restful areas in a piece of art-duh) and then I continued putting the numbers on.  I screwed it all up!  I put 12 next to 23.  I sabotaged my own success because I really didn't like it.  Then I thought I would just cut out some canvas and patch them. Oh boy.  That was a lousy idea and I knew it.  So I purposely cut into it to ruin it.

For the 3rd time I started over (each time having to drag the sewing machine back upstairs-I knew the last time I took it down that I was jinxing it.  I would mess up for sure and have to drag it up again-which I did).  So, then, I went for simplicity but as meticulous as I could get it.  I was so afraid I'd mess up again I penciled in the whole thing first.  The pencil lines I had drawn on had to be erased.  You guessed it-it smeared the lead.  I had to wash it, blow dry it and then iron.  Whew!  It's done!
Posted by Julie at 11:15 PM