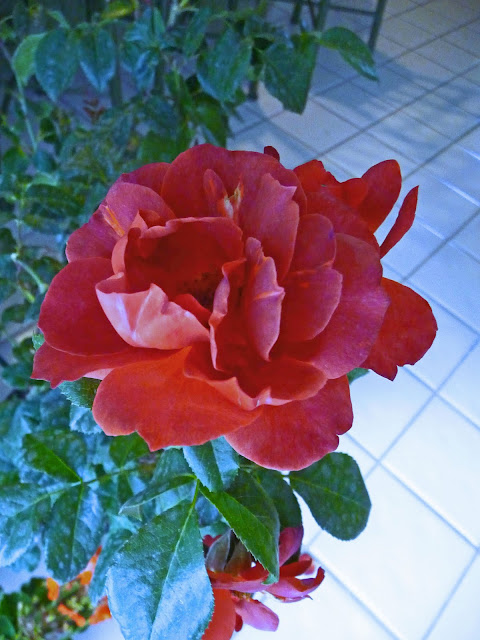 I was at Millcreek Gardens yesterday buying a miniature rose bush for a friend to honor her mother that had passed away.  I just could not resist getting this floribunda rose bush for us.  And by the way-if you don't know what a floribunda is then let me tell you.  It's a rose that has about 7 blooms on 1 stem instead of the tea rose that just has 1.  The tea rose is what you see in a bouquet.  I usually don't like floribundas as much for flower arrangements because they're more difficult to arrange but who cares when they're as gorgeous as this one.  Anyway, this prize winning variety is called "Hot Cocoa".  Hopefully you can see that it' a burnt orange in the middle and surrounding that is a mocha/orange/purplish color.  I read about them last night and people commented that they're very difficult to photograph and get the true color.  I had to play around on Photoshop because the initial photo was too bright and didn't show the brownish color.

Apparently this variety is very disease resistant and grows on it's own root ball.  Another thing I didn't know for years is that most rose bushes are really a lovely variety grafted onto a wilder rose root ball.  Why they do that, I don't know.  But I had a yellow rose (replaced by this yesterday) that had turned into junk the last 3 years at least.  For probably about 10 years it's was a beautiful producer and bugs and diseases didn't attack it at all but the wild rose took over and ruined it.  At that point you might as well just pull it out.  That's what the rose expert told me yesterday.  That's okay because I know I'll love "Hot Cocoa".  She said that I will really love this because they produce all summer even when it's very hot.  My kind of rose!  I have to bring them in the house all summer long and usually in the middle of summer I don't have much at all to do anything with. 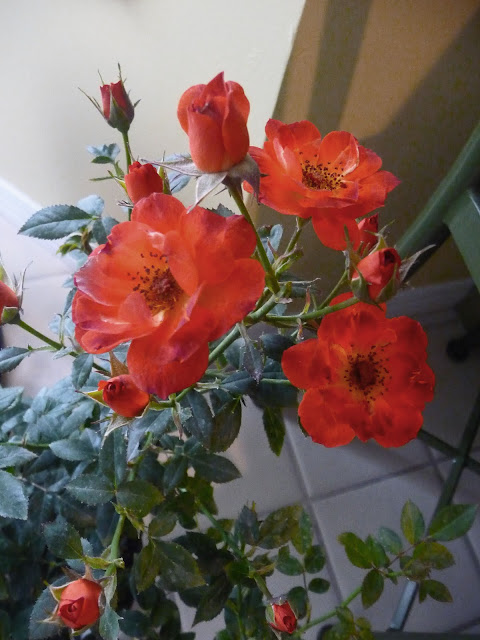 By the way-the one I bought for my friend is called "Smoke Rings".  I really want to get that one also.  It's very similar to the other one and they would be so great in the same arrangement together.  For a miniature it's just delightful and that's next on the list along with...............  I may have to go get that today.

P. S.  Can you imagine how beautiful it would be to reproduce this color of rose with the glass mosaics like my rose in the middle of the last post's entry called "Scarlet"?  With the green rose leaves surrounding it?  Good thing I didn't toss all my mosaics covering my table in my studio.
Posted by Julie at 10:26 AM