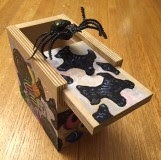 So, tonight my son, Charlie, asked me if I had written on my blog recently and I sheepishly said, "No but I've watched a lot of kitty videos on Facebook".  Bad.  Bad.  Bad!  So, that got me off my you know what and I decided to show my most recent project. 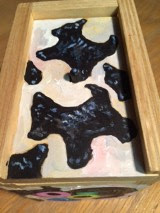 Chris gave me a box like this years ago and he had taped a licorice wrapper on it because he KNEW I would be a fool and fall for it.  So what happened.....I eagerly opened the box and promptly had a heart attack and died.  Well, the second part isn't true.  I'm still here but I did scream my head off. 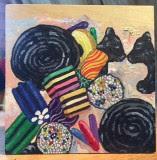 After that we embraced the spider box and there have been many an unsuspecting victim that we have pulled it on (kind of like the fake poopy diaper that  we wore out from overuse-so so fun).  Many years went by and Chris decided to figure out how to make it.  The original spider box he bought.  Smart guy that he is (I don't know how he did it) he made one!  I've actually painted 3.  They are so much fun!   Just think.  The box is so inviting!  This particular box theme is everything licorice because the person we're giving it to loves it.  We hope they'll get many years of fun out of it.  I'm going to put a rock hard finish on it and we'll hope the spider doesn't get yanked out by grandchildren.  Hahaha.  The spider that's in one of the other boxes that we made has been played with so much by our granddaughters that it's kind of pokey coming out of his hole.  He might need a repair soon.  As we were Face Timing today we watched the 1 year old, Rinnie, open it up and give the spider a kiss.  Too funny!  It makes all the work worth it to see that. 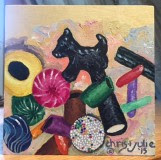 I hope you can get a good idea of how these look.  For some reason the photos are blurry.  I may have to change the image size but not tonight!

*I did but to no avail.  So I left all but the first one small. You can click on each one to see the detail better.

**I take it back.  When you click on them they're even smaller.  I think you might be able to stretch them on a phone or IPad.  Oh well.  I should have used my regular camera but I don't think the colors are as good as with my IPhone.

Don't let the spiders get you tonight!  Hahahahaha!
Posted by Julie at 12:09 AM