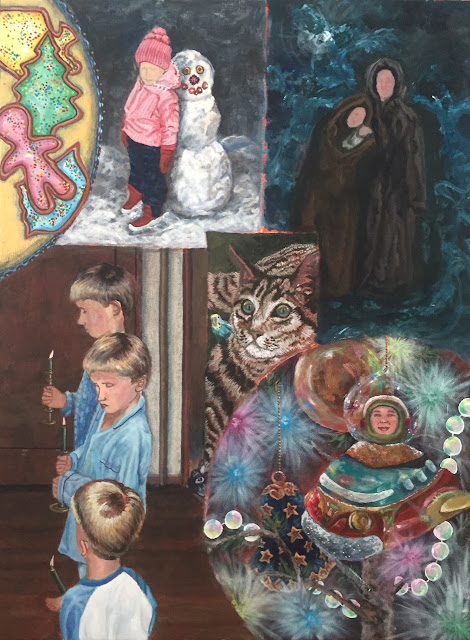 Well, it's probably been more than 2 years that I've been working on this but I got a lot done on the Christmas painting.  I was at our cabin for a good deal of the summer and I was determined to paint!  So I did!  I'm still working out the Mary, Joseph, and Jesus vignette and my son, Kip, does not look right but at least the boy's hair isn't green any more.  I'm redoing Aren's face in the Christmas tree ornament because I didn't like it before.  But it's moving along!

I've been doing tons of sketching withing the last year and at times my sketches got pretty bizarre as you can well imagine since it was during my chemo treatments. When I had to take steroids for 3 days after each treatment it was like entering The Twilight Zone!  But I've really let my imagination stretch to almost the outer limits.

I've always been told by my teachers growing up that I should illustrate and I never followed that path but now that inclination is manifesting itself more and more. 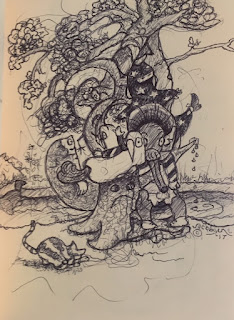 I start out with light scribbles (that's why you can see sketchy lines) and as I keep doing it things pop out that I never would have been able to think of by just drawing. 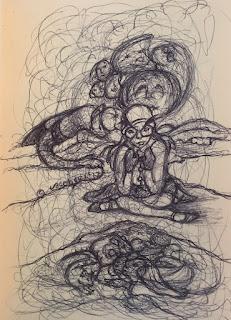 Now, I'm thinking it will be very fun to write a story about each of these and personalize them for my grandchildren's Christmas. 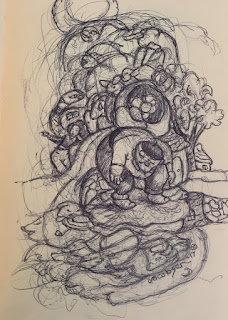 There's plenty of good story material in each one.  I'm not a writer but I might try my hand.  I've been trying to get my son, Kip, to write about these.  He's a gifted writer! 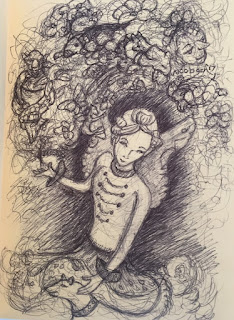 When I look at my beginning sketch books I can't believe how much I've been able to extend my imagination through my pen. 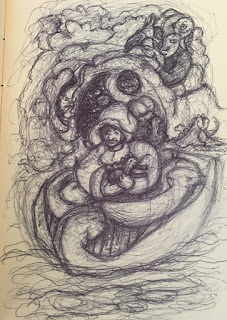 I use a pen because then I can't erase.  Erasing would be a big mistake because a lot of times I come back to these and see more hidden creatures.    How in the world it happens, I have no idea, but I'm glad it does!

To further my recovery from my treatments I've decided I really need to get back to blogging more because it is such a good exercise for the brain and it's a great way to be in touch with the rest of the world.  I have one really fun friend now that I met through clicking on the "next blog" button.  We have so much in common.  So good or bad you're going to hear a lot more from me now!
Posted by Julie at 11:11 AM