It's the Albion Basin again! 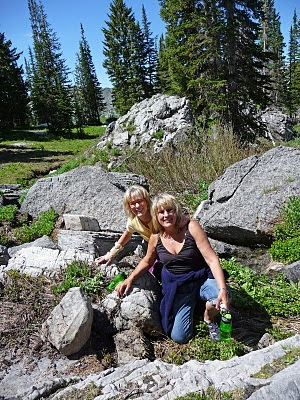 My sister, Carrie, and I went on a very fun hike to the Albion Basin.  It started out to be a perfectly awful day.  We looked stupid when we put on cheapy plastic tarp rain coats that we stole from the men's backpacks in our basement.  But we weren't going to give up on a wonderful time together.  The parking lot was full that was by the beginning of the trail.  So we had to park in the first lot.  We had no idea until we got out of the car how far away it was.  By the time we got to the trail we realized that we had stupidly left our water bottles in the car.  The teenager that was in the guard's hut just happened to come along on a four wheeler.  It was kismet!  We asked him if he would go to our car and get the water.  I must admit it was an idiotic thing to do but I gave him my car keys, fully trusting that he wouldn't take off with my Subaru.  I know this would be a more interesting story if I could say he did. But he was great.  Saved us a hike back to the car.  My husband thought I was a nitwit and I was. 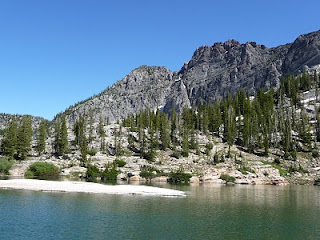 One of my favorite vistas on the hike is when you reach Cecret Lake.  Because of the strange late beginning of summer this year there is still some snow in the mountains.  We were so surprised to see a floating iceberg on the lake still in the middle of July!

Now the only disappointment to me was the fact that probably 80% of the flowers were not out yet.  There were tons of Indian Paintbrush just ready to burst forth.  We missed it. I'm sure it's even more glorious up there now but we still had fun reliving our childhood memories of when we were little girls in Brighton happily drifting through the mountain meadows.

I should tell you that the clouds magically disappeared-along with the mist and rain-and the sun burst forth to make the day perfect!
Posted by Julie at 7:59 PM