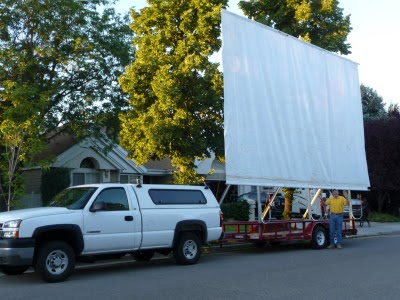 My husband, Chris, gets these dreams.  You know something to build and build it big and very cool.  One of these dreams was to build a giant movie screen to show movies in the neighborhood.  Then everyone can get together and have fun-plus get to know one another better.  He built a prototype about 3 years ago and it was, well, okay.  It was mostly not great but when he secured it to a fence at a park by our house it worked well enough to watch "The Wizard of Oz".  But it was rickety, no kidding. 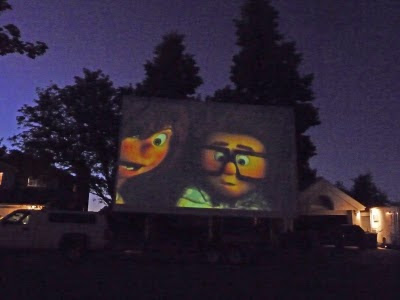 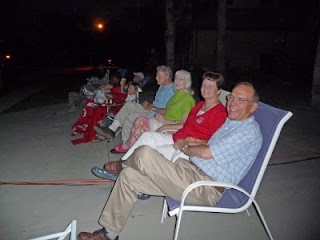 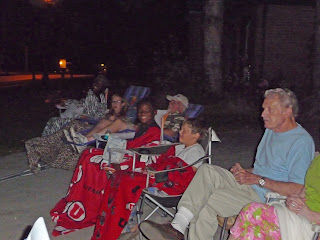 So, this summer, instead of buying canvas and dealing with that he bought an old sign from a sign company.  Flipped it over to the white side, built 20 foot high metal supports and bolted it to our trailer.  Charlie was his partner in crime.  They concocted some kind of complicated pulley system to hoist the sign up like a sail.  Well, guess whose trailer is out of commission for the summer?  You are right.  But we don't care.  Last week we tested it.  He drove it across the street (wiped out one of the big branches of a tree in front of our house) and got a projector connected to some speakers-we watched most of "Shrek" as a test from across the street.  It was a huge success!  So, several days later we invited some of our neighbors to watch "UP!"  As you can see it was just as great as going to the drivein movie theater-only it's free and not crowded.  Now it's going to be the traveling screen for the rest of the summer.  It works great in our neighborhood because we have underground wires.  We figure we can get in a least 4 other movie nights. 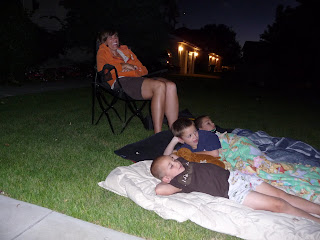 So what is going to happen to all the materials, you ask?  You know.  Stored like the rest of his "great junk" in our backyard or garage.  But where are 20 foot poles going to fit in?  That's what I want to know.  Hmmmm.  I'm not too worried now.  I'm too busy eating popcorn and watching movies!  Yea!

P. S. I retook the picture of my painting and it is better but I still have to get a pro to get it right.  Maybe it's just my picky perfectionist eyes.  Do you think?
Posted by Julie at 5:02 PM