2 must haves for oils 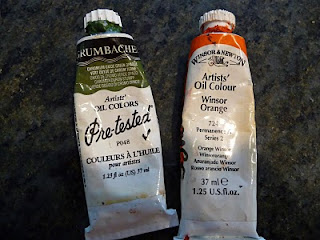 I had another great art teacher for a workshop that I took.  His name is Frank Covino.  Frank had scrutinized all the masterpiece paintings in person that he could and tried to figure out what the old masters used for colors, technique and supports. What he came up with is you have to have Chromium Oxide Green by Grumbacher for all skin (I can't remember if he said darker skin also but I think it would be a good idea).  Wherever there's a shadow or you want to make the skin recede you need to add a little of the C. O. Green.  It's good for an under painting also.  All skin, according to Frank (I'm assuming he meant even darker values) has Windsor Orange by Winsor & Newton.  THAT is the orange you would want to use to mix with the other skin colors.  He also said that wherever you can sense a pulse/blood you need to add a little blood color to that area.  You will enliven the nostrils too if you add some of that blood there also.

2 great colors/2 great tips from Frank Covino.  If you're interested in his workshops I bet he's probably still teaching them.  If you use his method your painting will last at least 500 years or more, many more, because he has a special medium that he has concocted and when applied to a wood panel-well, it's going to last almost forever.  I have one painting I did in the workshop.  It's not a masterpiece at all and will probably last a 1,000 years.  Drat.  Not the one I would choose to go down through the ages.

Art History Moment:  Speaking of a retched example to be famous for: Okay.  Who hasn't heard of the portrait "Whistler's Mother"?  Boring (to me), boring, boring.  So when we began studying James Whistler I thought it would be a big drag.  But, unfortunately, that image is what he is well known for.  Whistler was an exceptionally innovative artist in that he was really the first to make use of the influence of Japanese prints.  A fascinating American character that lived in France and London.  In looking at "The Girl in White" you'll notice that he has several "whites" in this painting.  He had the challenge, as I had in "America's Favorite City", of making them look different and stand out.  This girl in the painting is hardly a girl at all but was his mistress,  Jo Heffernan.  What is it with these artist guys?  Does every dedicated male artist have to have a mistress?  I certainly hope not but the mistress/models are the ones that become famous.  After talking so much about Maxfield Parrish, for the life of me, I can't remember his wife's name but I knew his mistress, Susan Lewan.
Posted by Julie at 9:49 AM