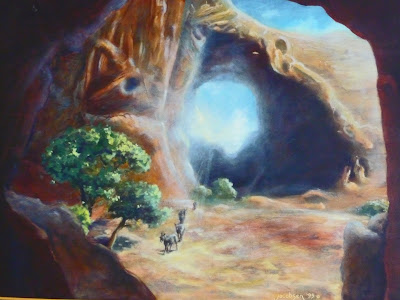 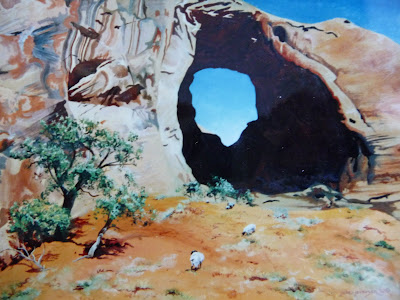 This was one of those sagas that went on and on for about 3 years. I'm not kidding. Chris and I wanted to have a painting for our living room. So we searched for ideas. This is what we came up with. It's a natural arch in Utah. I can't remember the name. Anyway, it's a very large painting and those can be so tough. I got it all finished and decided that it needed some animals. The photo I did it from actually had some sheep in it. Now, since I did this a lot from a magazine photo I could not claim this as original, at the time. In the photo there were some Navajos herding sheep. I was so happy with it but felt it was a tad harsh. I exhibited it at the Black Diamond Shop in Salt Lake City. One of the guys that worked there, his name is Conrad, told me that you would never see sheep in Southern Utah like that. We had an argument and I was quite ticked off. Conrad became a real star in the mountaineering world as he's the one that was up on Mount Everest and found Hillary's remains in the 1990's, I think. That's besides the point but, even though he made me so mad I learned a valuable lesson.

Back to the painting. During the space of 3 years I nearly drove myself crazy trying to paint this and that while it was on the wall. One day my husband came home from work and I was desperate. I told him to PLEASE get the chain saw and destroy it. I was going to the store and wanted to come home to the loss of a headache. Half way to the store I thought about what I could do to fix it and called in a panic at a pay phone to ask if he had. Fortunately for me he was too tired and sitting down for a while before he was going to get out the chain saw. I told him to stop and not do it!

Then I got it down and recreated the whole thing in many ways. As I said yesterday a dragon formed in the rocks slivering down the right side. There's a screaming face (probably reflected my stress over the whole thing) too. Plus other fun hidden objects. I felt that it needed some kind of framing and brought in the foreground. This was from my imagination completely. Then I decided that I wanted to put burros in it. As I worked and worked I decided to put oils on top of the acrylics to soften and add drama (lighting). I feel it's a much better painting now and it hangs over our fireplace.

The big lesson I learned from that little twerp, Conrad, is that it's so important to research everything-including the plants, animals, etc. If you don't then there is always going to be a "Conrad" that will make your blood boil. We artists have a hard time taking criticism from people that we feel don't know art. My husband has made me mad on a regular basis throughout all the years but, you know what? He's usually right and it's mostly about structures and perspective. Darn him. Good thing as I would have made a fool of myself many times over.

So, there you go. The famous Chain Saw Story! Ta da!

P. S. Notice something else weird? The sheep were too big. See. I told you. Lots of lessons from this painting.

Incidentally there are some other great lessons in this painting but that's for another day.