Subject matter can mean a lot to only you 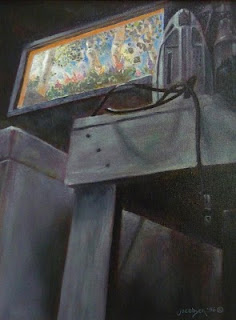 I thought I would bring up a painting that hardly ever sees the light of day-literally.  "The Housewife's Summer".  It tells my story in so many ways.  Back in the '80's and '90's we lived in an old Cape Cod style house.  The basement truly was a dungeon.  You know what I mean-concrete with old stuff everywhere.  Guess where I spent about 25% of my time?  This sub abode.  With 4 kids there were always mountains of laundry.  One time I picked up some dirty clothes off the floor and a mouse jumped right up and at me.  Now, I'm not afraid of mice but it startled me.  Anyway, I could look up and see outside the window.  Could see the kids running in the sunshine.  Don't get me wrong.  I was thrilled for them but I felt like DOROTHY in the Wizard of Oz.  The basement was Kansas-all dark and dreary.  Outside was Oz-all bright, colorful, cheery, etc.  To top it all off the front of our house faced one of the busiest streets around.  So there was constant traffic-fire trucks, ambulances because there was a hospital west of us.  If you think this picture is an exaggeration, then you would be wrong.  There was even that little orangish  glow around the teeny window.  Luckily this picture is in the past.  We now live on a lovely street where, at last, I can hear the birds chirping.  I can even stand still and hear nothing.  Love it.

Art History Moment - Have any of you ever heard of Minerva Teichert?  If not-you need to look her up.  She was an artist from the early 20th century, born in Utah, and lived her married life in Wyoming.  I was just thinking, "Now, what woman artist that I know about could relate to this painting of mine?"  Minerva had 5 children and lived on a farm. She trained at the Chicago Institute of Art and when she asked one of her teachers why he criticized her art so much he said that he didn't think the other art students would amount to anything but she would never quit producing.   Most of her art is religious and the soul of her works shines through everything she does.  I'm always thinking about her.  Maybe I could be like Minerva and simplify things but still get my point across.  I would have loved to see her sketch book.  I just might someday as from time to time in Salt Lake City they have exhibits of her work. There are some on permanent display in the Conference Center of the LDS chursh, Brigham Young University and the Springville Art Museum.  She was truly one of the best female artists-well, I think she is for that time period.  Good old Minerva probably really slocked the buckets of muck and spent a lot of time in the Never Never Land of her brain.
Posted by Julie at 10:26 AM