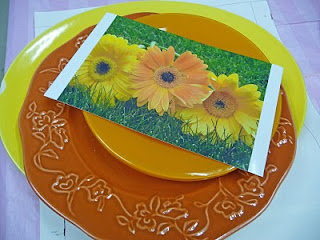 I am having just toooo much fun now that I'm out of school.  I have a spot above my kitchen sink that really could use a little personality.  As you can see it's a long narrow strip.  So I thought a broken china mosaic would be just the thing.  It will be my biggest mosaic project, yet, but I'm up to the task after doing all of the broken china hearts (see earlier posts to view some and also a tutorial).  My daughter is a terrific photographer and she took a pic of some flowers that we gave her for graduation quite a while ago.  I'm going to use that as my starting point for the composition.  Normally, you know what a stickler I am for getting permission, I would get authorization for using another person's photo but I think my daughter is okay with my using this.  After all she might end up with the mosaic someday-maybe as I have 4 kids. She has a better chance since it's from her idea. 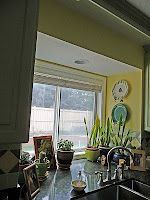 So, my first step was to measure above the sink and decide how I thought it should look.  Artist that I am-I thought, "Oooooh.  smaller related mosaics on either side would be so pretty also!"  So, I'm going to make the main one a little smaller than I had originally intended.
Above you can see some of the china I needed and the pic.  Locating the orange china was really holding me back but I found some-plus some glass plates.  I love to mix the china and the glass because the glass gives the work sparkle.  Oh, your local thrift store is your best bet.   It's so entertaining because you can tell them not to worry about wrapping it carefully.  You'll get an odd blank stare that really is funny! I always have mercy and tell them I'm an artist.  Then they get it. 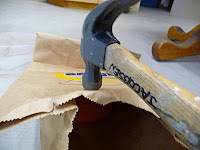 This second step I do love so much-even though it's messy and noisy (not a big fan of messes).  SMASHING THE CHINA! 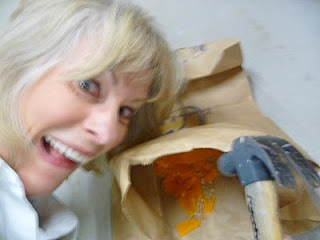 Here is where you can take out all your aggression for the week.  So, you might want to save this event for when you are really needing it.  When I first started doing the hearts I had lots and lots of china to smash.  It got old after a while because I wanted to get it done and clean up the mess.  I like the paper bag because it seems to be thick enough to do several pieces before you have to get a new one.  Don't worry about having the right sizes and shapes because you won't know until you start the design what is needed.  You can adjust them later with the tile cutter (that you will definitely need). 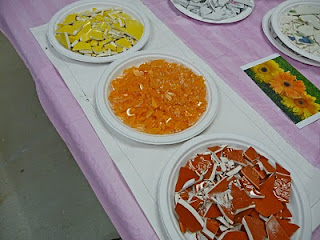 There.  That's better.  Left brain artist that I am I like things to be orderly or I just go nuts.  I really like the thick paper plates because you can fish through them for pieces but BE SURE TO WEAR GLOVES when you go fishing.  I have gotten some nasty little cuts because, after all, isn't broken glass and china dangerous when it breaks in the kitchen?  Yeah.  You know it (sorry I fall into the stupid lingo of our household but we have fun!).
Step 3: You can see under the plates the white sheet of paper?  That's where I'm going to build my design.  Notice I've left a border around it in case pieces fall off.  It just gives you something to slide your work around if you need to move it.  Now if you were REALLY organized you would have the wood for the finished piece underneath that you could lay the paper on top of and pick that up if you need to.  But I don't know if I would go to that trouble yet because, whoever is cutting the wood, might be crabby about helping you and that would further delay your work.  Okay.  I know.  I know.  But I have my husband do it because he is sooooo good at cutting wood (notice I keep him thinking that?) and I don't want to go into his domain unless I have to.  He has other thoughts about neatness in the work area.  He's an electrician and you can well imagine all the stuff he has pulled out all the time on the work bench.  That's his job.  Anyway, you might change your mind about the size, etc.  Good to wait, I think.
So, not we, I mean I am ready to begin.  I haven't yet because I'm working on my horse/cat painting at the same time.  Oh, I also have the flower painting going.  See how smart this is?  When I get bored, stuck, mad at one of the projects I can just turn around and do something else.  This is so freeing and sometimes you've go to take that break to see things differently.

Art History Moment:  Just reflecting on my class I came across some works from the Gothic period of the 1400's.  This is that excruciatingly awful time of the Black Death.  Yuck.  That's why I love art history.  You can't study the art without the history along with it.  These poor people.  They didn't realize that it was their sanitary conditions that brought it on.  The rats thrived on it.  Even if they didn't have a problem in their particular village-all they had to do was get something off a ship from Asia and take it home to spread the disease.  There were lots of rats on the ships.  So gloomy, I know.    So here we have a print from the 1400's.  It's European and I can't tell you the artist (it looks like possibly German? A woodcut or etching?)  I learned in my Human Heritage class that along with the plague came the witch burnings.  Some anthropologists think they were a scapegoat to take the attention off of tithing and noble excesses.  Interesting?  Marvin Harris, noted anthropologist, says that the church and the ruling element invented the witch craze to create a new enemy for the suffering-dying from plague, starving, landless-peasants, to focus their wrath on.  Incredible.  Oh, and it was a good way to keep women under control too.   Did you know that the old nursery rhyme, "Ring Around the Rosies", is all about the plague?  Apparently one of the signs of the sickness was a ring around an area of the body.  The "ashes, ashes...."  well, you know what that means.  Posies?  You got it.  Fascinating.  I love history.
Posted by Julie at 11:23 AM