Letting you in on my new Monday Art Day entry 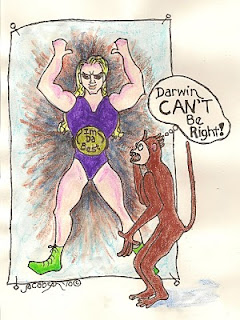 I am having so much fun with Monday Art Day.  Illustration has always been my thing.  Just thought you'd like to see what I came up with this week.  The key word this week is "monkey".  I don't know if I'm going to do the new challenge as I've got a midterm on Monday and must study hard.  My last test was quite tricky.  So, I'm trying to be prepared.

William Holman Hunt    -    "Morning Hunt"
Art History Moment:  A group of painters' work that I really enjoy looking at is called the "Pre-Raphaelites".  William Holman Hunt belonged to this group and is not as well known as some of the others.  Typically his style is one of fairly garish colors but this piece (above) is not one of those.  "Morning Hunt" is one of soft and subtle coloring.  Just look at the bedspread! There are so many little shades of pastels that flow together harmoniously.  The Pre-Raphaelites are noted for their highly dramatic subject matter and, often, use the classical works of literature as their base for ideas.  Some critics thought their whole premise was extremely presumptuous and they didn't like them at all.  Charles Dickens was one to call them "mean, odious, repulsive and revolting."  Wow.  Charles didn't get to look into the future and see what was to come in the 20th century.  He didn't get to see Salvador Dali or Picasso.  If he could have he probably would have been kinder to the Pre-Raphaelites.
Posted by Julie at 6:40 PM