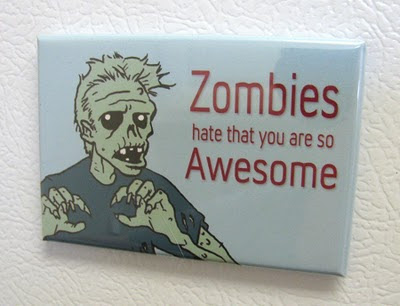 Okay.  What a coincidence that I would happen to read about Zombies in my class yesterday.  I answered a comment about it.  So, I decided, rather than rewrite the Zombie history, I would just copy it here.  It's so interesting!
Speaking of Zombies-I just read an article for my Human Heritage class.  It was so interesting. The gist of it is that it's the Haitian form of capital punishment.  They rub poison (the voodoo priest or some such), derived from a puffer fish, on someone's skin-an undesirable/unpopular no good-and they actually become      like they are dead.  It lowers everything, like breathing, to an undetectable rate.  They get buried legally and dug up, clandestinely, as soon as possible.  That person's luck has run out if it actually kills them.  If not they are kept continually drugged with another tranquilizer-hence the zombie effect and forced to work as laborers.  This scientist that went to live there and solve the mystery said that apparently the only thing worse than being a zombie is the thought of becoming one.  I think that would be a great deterrent as the thought of being forced to go through that would be so frightening. It all stems from the slave uprising against the French in the 1600's and the fact that these poor Africans were forced to live in Haiti as slaves.  There's your history/science lesson for the day!  I love that class and will be sad when it's over with in 2 weeks.

Whenever I think of Zombies I think of the old movie with Bob Hope called "Ghost Breakers".  There are zombies all throughout the movie but it's in Cuba.  Fair warning:  politically incorrect for all of you that are sensitive.  It really stereotypes African Americans but if you can put that aside it really is a funny and entertaining movie. It scared the heck out of me when I was little because of the ghosts in the mansion.

Want the zombie magnet up top? Head over to tinaseamonster's Etsy Shop. (she has lots of cool zombie stuff!)
Posted by Julie at 9:39 AM